Jealousy is an overpowering emotion and it can make misery of a life.  At its core is a sense of worthlessness or low self-esteem where the sense of self can be threatened by the success or lack of attention of another.  The reaction is often to retaliate, to bad-mouth the other person or seek to bring them ‘down a peg or two’.  This is not fitting with the description of self that anyone would like to have but the danger is that if jealousy is allowed continue without checking, it can become the default characteristic of the person.
Perhaps it stems from the survival-of-the-fittest position where security and success only lies at the top of the pile but there is no doubt that insecurity lies at its heart.  It begins with comparison: the other person is getting more credit than me; my partner will be drawn to someone more attractive than me; my friend has a bigger house, fancier car, more beautiful body; the list is endless.  Instead of tackling the real issue which is the self-esteem issue, we tend to think the problem will be solved by promotion, more success or a more compliant partner.  As anyone who has suffered from jealousy knows, this is not the case and there is always more comparison, always someone who is doing better or is better liked than me.

“If we can delay our response by even a few minutes and calm our bodies down by breathing or observing,

we might be able to access our intelligence and realise where the problem is and how to solve it. “ 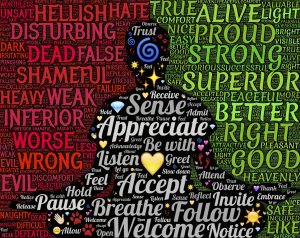 There is a saying that a person was ‘blinded by jealousy’ to describe the motivation for subsequent actions.  The truth in this is that when we are emotionally flooded by jealousy and rage, our intelligence cannot work and we say and do things that we deeply regret when we cool down. This is the beginning of the cycle of jealousy and anger followed by shame and guilt.  What a destructive pattern to engage in.

The first step to dealing with this is self-awareness: usually the jealous behaviour will be pointed out by people who love or care for the jealous person.  The trick is to be grateful to the person for pointing it out and accept that they are telling you for your own best interest.  Of course behavioural change is desirable but more importantly some self-compassion is what is needed.  Rather than make yourself feel better by achieving more or cutting off the commentator, take some time to sit with the difficult feelings and have some sympathy and tenderness for the difficult time you are having.  When we feel slighted or passed-over, our reaction is often swift and rage takes over.  If we can delay our response by even a few minutes and calm our bodies down by breathing or observing, we might be able to access our intelligence and realise where the problem is and how to solve it.

The cause of the problem is insecurity or low self-esteem and the solution is to feel competent and okay right now – not to feel brilliant or the best.  We often indulge and expand the jealous feeling by endless thinking and speculation of how the other person is wronging, ignoring or undeservedly succeeding over us.  Once the feelings are calmed down, this thinking can be challenged by simply focusing outwards and hooking your intelligence on what is actually happening right now rather than on speculation.  If hurt or damage has been caused to others, there is a need to apologise, forgive yourself and completely let it go.  Jealousy is a tough feeling to overcome, so be compassionate and take it one step at a time.