Hysteria in the 21st Century by Milltown Lacanian Association

Hysteria in the 21st Century

“Where have all the flowers gone”? asked Peter, Paul, and Mary in 1960’s America.

Today, we may well ask: where have all the hysterics gone?

Since Antiquity, efforts have been made to put an end to their blooming but ever reborn, ever renewed hysteria continues to disturb and to question us and in like manner we continue to resist as Lacan emphasizes by not wanting to know anything about it. It’s suppression from the D.S.M. is the latest line of defence against this entity which implicates each and every one of us. Suppression as the D.S.M. testifies ensures that it makes its appearance elsewhere, in many unexpected places, under different guises.

This Study Day will serve, not as “roman à clef designed for our delectation” (Freud, 1905) but will urge us to consider “that long time passing” into what we now call the 21st Century.

We may engage in the refrain begun by this gentle song of protest in stereotypical “hysterical” fashion – “when will they (we) ever learn”? which has been systematically explored by Dr Melman in his book Studies on Hysteria Revised.

But let us be aware as Dr Melman makes clear, “the ethics of psychoanalysis is not of the order of a recipe, of a remedy”. Helen Sheehan

Contributors on the Day: 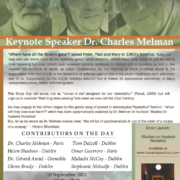 Most of these news updates are republished from the websites of our member associations. If you have any queries, please contact the publisher: at the bottom of each update there is a link to view the "Original Post".
ICLO Society of the NLS 2 Events Friday 10th June & Saturday 11th June What is family therapy – and could you benefit from it?
Scroll to top
This website uses cookies to facilitate browsing. Accept Privacy Statement
Privacy & Cookies Policy
Necessary Always Enabled
Non-necessary