An umbrella group representing over 5,000 counsellors and psychotherapists in Ireland has called on the government to introduce statutory registration for their profession in this country without delay.

This afternoon (September 23, 2008) the Psychological Therapies Forum presented agreed recommendations for the statutory training and regulation of counselling and psychotherapy to Mr. John Maloney, T.D., Minister of State at the Department of Health & Children with responsibility for mental health.

“We believe it is imperative that the public is protected by promoting high standards of education, training, competence and conduct among the counselling and psychotherapy professions.” Forum representative, Derval Ryan told the Minister at the presentation of the submission to him in the Davenport Hotel, Dublin.

She said that at present this protection is provided by a process of self regulation by a number of professional organisations which lay down for their members strict standards of on-going education, training and ethics as well as a complaints system to protect the public.

“While this works very well for those who are accredited to a professional body, there is no redress for complaints against practitioners who are not members of a professional body.   It is possible for anybody to call herself or himself a counsellor or psychotherapist and to set up in practice without the required training and competence and there is no redress board or sanctions for complaints against them and indeed no way to prevent practitioners who have been disciplined by their accrediting body from continuing to practise.”
In November 2005, Mr. Tim O’Malley, the then Minister with responsibility for mental health initiated a consultation process on the statutory regulation and registration of counselling and psychotherapy in Ireland.   He requested the organisations to engage in a process that would result in an agreed framework for standards within these professions.  He said this work should be carried out with a view to including counselling and psychotherapy in the next phase of the Health & Social Care Professionals Bill 2004.

Following the Minister’s request, the Psychological Therapies Forum, which represents the professional organisations for psychotherapists and counsellors in Ireland was formed and has spent the last three years drawing up the current submission to government.

Forum representative, Gillford D’Souza said “We would like to strongly urge that counselling and psychotherapy be included in the next phase of professions to be regulated under the Act.  We are unified in this submission and we believe we need regulation for the protection of the pubic by establishing standards, holding practitioners to a regulation and taking action when practitioners do not meet the standards set.”

John Farrelly who chaired the event, concluded that “The recommendations we have made here today should create a consensual and smooth pathway into the future, ensuring Ireland is at the cutting edge of psychological therapy while offering the public optimal protection. 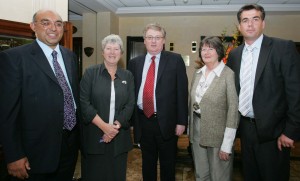